The name of Alfred Percy Sinnett (1840–1921) will ever be honoured in the annals of Theosophy.  He, along with Mme H. P. Blavatsky and Col. Olcott, bore the brunt of the opposition which was inevitable when Theosophy was first expounded in the nineteenth century. To Mr Sinnett will always belong the honour of having given the Western world, in his Esoteric Buddhism, the first broad outline of what the Ancient Wisdom taught about Deity, Nature and Man.  He was Vice-President of the Theosophical Society between 1880–88, 1895–1907, 1911–1921, and Acting President of the TS for four months in 1907, soon after the death of Col. Olcott.

Alfred Percy Sinnett was born on 18 January 1840 in England, and educated at London University School. In 1859 he became assistant sub-editor of the London newspaper The Globe. Then followed some years as sub-editor and lead-writer on various London papers, before he went to China in 1865 to be editor of the Hong Kong Daily Press. After three years he returned to London and became a lead-writer for The Standard.  In 1872 he returned to the East, but this time to hold a position of great influence as editor of The Pioneer, a leading English newspaper published from Allahabad, India.
He was a man of wide-ranging interests and an open, inquiring mind, besides being a good newspaperman. In all his writings he appealed to the intellect of his readers and had a great power of marshalling ideas.  By temperament he was drawn to science, and, being a keen student of chemistry, he had a laboratory of his own.  Sir William Crookes and Mr Sinnett were old friends and had many interests in common.

Meeting the Founders of The Theosophical Society

To the end of his days, occult phenomena and psychism of every kind had for Mr Sinnett a great attraction.  Anyone with any kind of psychic gift was sure of a cordial welcome from him. He himself possessed the gift of mesmerism. He became interested in the philosophy being expounded by Col. Olcott and Madame H. P. Blavatsky, and was curious about some of the remarkable happenings that always seemed to be taking place wherever HPB was.

On 25 February 1879, nine days after the landing of Mme Blavatsky and Col. Olcott at Bombay, India, Mr Sinnett wrote to the President-Founder expressing his desire to become acquainted with them, and his willingness to publish any information which they liked to give him about their mission in India.  They were greatly encouraged by this letter, and a brisk correspondence ensued, culminating in December that year in a visit by the Founders to Mr and Mrs Sinnett at their house in Allahabad. The Sinnetts joined The Theosophical Society on 26 December 1879 and the Founders met other influential visitors who were to play some part in the affairs of the Society, such as Mr A.O. Hume.

The following year, 1880, the Founders visited the Sinnetts at their summer home in Simla, the summer capital of India. It was during this visit that most of the phenomena so fully described in The Occult World occurred.  A little more than a year later Sinnett stayed with Mme Blavatsky for a few days at the then Headquarters of the Society at Breach Candy, Bombay. It was not until the beginning of 1883 that his epoch-making book Esoteric Buddhism was published, but for a long time before that he had been in frequent correspondence with the Mahatmas, for the book is entirely based upon the information contained in the great mass of letters received from them. C. W. Leadbeater writes about the effect these two books had:

'In 1881 Mr Sinnett startled the literary circles of London by the publication of The Occult World . . . Here was a book by a man whose position vouched for him — a book short, definite and to the point.
True, it told an astounding story — a story to the ordinary man of the world all but incredible, though strangely attractive; but it told it in the most straightforward and transparently truthful manner, so that to many of us in spite of its overwhelming novelty it carried conviction upon its very face.  And when shortly afterwards it was followed by the fuller statement of the truth, clear, reasoned, comprehensible, contained in Esoteric Buddhism, it is no exaggeration to say that thousands of souls . . . were stirred into instant and delighted recognition of a knowledge which had been theirs long ago in other bodies and under other skies.  . . . I had at one time in those early days the privilege of assisting Mr Sinnett in answering some of the enormous mass of correspondence which descended upon him from all parts of the civilized world in consequence of those books . . .'

It was at Simla that the events took place which eventually led to the letters published in The Mahatma Letters to A. P. Sinnett.  HPB performed some amazing phenomena which she attributed to the Mahatmas with whom she was in more or less constant psychic contact. Mr Sinnett was convinced of the genuineness of these phenomena, and in his book The Occult World he was at great pains to stress their authenticity.

He was also of a practical and scientific turn of mind, and wished to know more about the laws which governed these manifestations. Specifically, he wished to know about those powerful beings whom HPB called ‘Masters’ and who she claimed were responsible for the phenomena.  He asked her if it would be possible for him to get in touch with them and receive instructions from them. Sinnett addressed a letter ‘To the Unknown Brother’ and gave it to HPB to transmit.  As a matter of fact, he was so eager to argue his case convincingly that he wrote a second letter before he received a reply to the first one.  The correspondence with them thus begun in October went on for about four years, till he had sufficient instruction in Occult Science to enable him to outline a philosophy which followed the ancient teachings found in the profoundest scriptures of the world. The letters he received were eventually published as The Mahatma Letters to A. P. Sinnett.  This volume demonstrates the ability of Mr Sinnett to arrange the fragmentary teachings given to him into a synthetic doctrine. He was himself largely groping in the dark, and though most of his questions were answered, at first he little knew what to ask.  However, he grasped outlines clearly and expounded them with enthusiasm.

Sinnett was the first Theosophical novelist; very soon after Esoteric Buddhism there appeared his novel, Karma, which went into several editions, and also a second less well known novel, United.  He also produced a play in London, on the subject of dual personality, entitled ‘Marriage by Degrees’.

It is interesting to note that each one of the two Englishmen, who had the privilege of instruction from the Masters in the early days, A. P. Sinnett and A. O. Hume, channelized their influence in his own way.  That influence aimed at a twofold result: the awakening of the West to Theosophy, and the awakening of India to a national life.  Sinnett did not feel drawn to work for India, but threw himself heart and soul into Theosophical propaganda.  Hume, on the other hand, soon lost interest in Theosophy, but became inspired to work for India and sponsor the Indian National Congress.  The Mahatma Letters to A. P. Sinnett and The Letters of H. P. Blavatsky to A. P. Sinnett, two volumes edited by A. Trevor Barker, survive — among the most important of the many excellent books which have been written in support of the Theosophical Movement.

In November 1882 Mr Sinnett was advised that the proprietors of The Pioneer no longer needed his services as Editor, on account of his connection with the Theosophists and his pro-Indian leanings since he had come into contact with them.

Early in 1883 he returned to London from India, and soon his home became the centre of the Theosophical movement in England until 1887, when HPB settled down in London.  Sinnett wrote, besides his two epoch-making works mentioned previously, The Growth of the Soul, a worthy sequel to Esoteric Buddhism, and also The Rationale of Mesmerism, Occult Essays and Nature’s Mysteries. Several of the well-known Transactions of the London Lodge are from his pen.  C.W. Leadbeater paid a tribute to Sinnett as follows:

'So long as the glad light of Theosophy shines through the ages that are yet to come, so long as Madame Blavatsky is revered as the mouthpiece of the Masters of Wisdom, so long also will the name of Alfred Percy Sinnett be remembered as one of her earliest lieutenants — as the man through whose writings that light shone out upon the western world.' 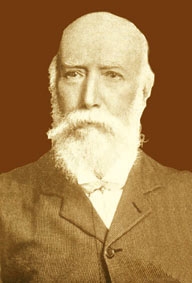