Curuppumullage Jinarājadāsa (1875–1953), the fourth President of the Theosophical Society, was educated at Cambridge University, England, and was an exceptional linguist, who lectured fluently in many European languages.  His wide range of interests and writings included religion, philosophy, literature, art, science and occult chemistry.  He made valuable sketches and notes during the clairvoyant investigations of Annie Besant and C. W. Leadbeater into the structure of matter.

He was the most widely travelled of all the Presidents and his contribution to the dissemination of Theosophy in many parts of the world was great.

Curuppumullage Jinarājadāsa was born on 16 December 1875 in Ceylon (Sri Lanka) of Sinhalese Buddhist parents.  His association with Theosophy began at the age of thirteen when he met C. W. Leadbeater.  A year later he accompanied Leadbeater to England, to be tutored there by him together with Mr Sinnett’s son.  In 1889, he met Madame Blavatsky for the first time.  He became a member of The Theosophical Society on 14 March 1893 through the London Lodge.  Jinarâjadâsa entered St John’s College, Cambridge in 1896, and four years later took his Degree in the Oriental Languages Tripos, and also studied Law.  He then went back to Ceylon where he became Vice-Principal (1900-1) of the Ananda College in Colombo, founded by Mr Leadbeater.  In 1902 he returned to Europe to study literature and science at the University of Pavia, Italy.  In 1904 he went to America, where he began his career as an international lecturer of the Theosophical Society, addressing audiences in various countries of the world in English, French, Italian, Spanish and Portuguese for fifty years.  Being a lover of art and beauty,  Jinarâjadâsa promoted the ideal of beauty in speech, writing, daily life, and also in the crafts.

Work for The Theosophical Society

At Adyar in 1914, Jinarâjadâsa gave all four Convention Lectures, which appeared as the book Theosophy and Modern Thought. Though he travelled much, he was usually back at Adyar every year to give one or more of the Convention lectures, right up to the end of his life.  In 1916, he married Miss Dorothy M. Graham, who founded the Women’s Indian Association with Margaret Cousins.

He was Vice-President of the Society from 1921 to 1928 when Dr Besant was President and later an itinerant Presidential Agent.  He cared devotedly for Dr Besant during the last years of her life.  During the war years he lived in England and established an important ‘Centre’ of work at London.

Mr Jinarâjadâsa was editor of The Theosophist on three different occasions — for three months in 1917 while Dr Besant was interned; for about three years in 1931–33 during her last illness; and during his Presidentship of the Society between 1946–53.

When Dr Arundale died in 1945, Mr Jinarâjadâsa was elected President, in which onerous office, despite ill health, he carried on his ceaseless work for the Society, about the history of which he had a unique and exhaustive knowledge. As President, he was keeper of the Archives, and had intimate knowledge of its precious contents.

As President of the TS

As President, during the post-war years, Brother Râjâ, as he was affectionately called, was very concerned about Adyar as it was affected by a shortage of workers, military occupation of the ocean frontage and consequent public traffic through the estate.  He did his best to free Adyar of all its entanglements and restore it to its earlier serenity, as the centre of Theosophical thought and the symbol of the unity of the Society, and preserving its international character.

In 1949 Jinarâjadâsa founded the School of the Wisdom at Adyar, for the study of Theosophical teachings in depth as given in the textbooks, but primarily because a student knowing these things could with widened vision ‘sit in the centre’ of his own being and ‘enjoy clear day’ in his understanding of the world of men and affairs.  The School was also to devote its studies to the thoughts of the great and the affairs of men in the larger sense through historical time. Its yearly sessions attract students from several countries to this day. He tried to make the Headquarters once more a centre for students and gradually reorganized the estate for that purpose.

Jinarâjadâsa could always present his thoughts with clear and delicate appreciation of the pictures his words would create in the minds of his readers. His mind had a strong scientific bent, which was apparent in his best-known book, translated into many languages, First Principles of Theosophy, and his interest in Occult Chemistry, the third edition of which he edited with loving care and released in 1951.  He wrote a number of books, some of them especially for children, with a lyrical quality as in I Promise, Release, The Wonder Child, etc.

A Lover of Plants, Animals and Children

Plants thrive in their proper habitat, and are even fastidious about their requirements.  Undeterred by these considerations, not to mention vexatious restrictions in the transport of plants from overseas, Brother Râjâ brought to Adyar several hundred species of seeds and plants from distant places — Mexico, Costa Rica, Brazil, Panama — and the estate at Adyar became a botanical garden of rare plants and trees, indigenous and exotic. Brother Râjâ made a characteristic remark in this regard:

There are tiny wild flowers, and large cultivated roses, lilies and lotuses. But the perfection of beauty in the tiniest wild flower is not less than the beauty of the most beautiful rose.

In the Silver Jubilee year of the Theosophical Society, Brother Râjâ carried out his idea of planting mahogany seedlings to form an avenue running through the centre of the estate with one plant for each National Section.  Soil from the respective countries was brought and put into pits prepared to receive the plants.  This ‘Founders’ Avenue’, which has been extended since, is a symbol of more than fifty countries of the world living together in one place — Adyar.

Animals too had their full share of care and sympathy from Brother Râjâ.  He had a special fascination for children, looking on them as souls, not as blank slates on which to write.  In a lecture delivered in many places in Europe and America, he gave ideas regarding a child’s welfare.  He believed that the purpose of education is to give a realization of the inner meaning of life. Throughout his career, Brother Jinarâjadâsa also stressed the need for an understanding of woman’s place in the scheme of life. He wrote:

'While both women and men have equal potentialities, though of different individualities, it is by their working together that each benefits from the other. The more woman is really Woman, the more every man benefits, and feels growing in him new potentialities.'

In simple ways, through his books and lectures, the highest truths were made clear to us by this acclaimed scholar and philosopher, artist, and lover of plants, animals and children, known the world over and revered as Brother Râjâ.

An Exponent of Art and Beauty

Brother Râjâ was known as a lover of Beauty and its expression by man — Art. His appreciation of Art was many-sided — he gloried in the beauties of literature, painting, sculpture, architecture, the dance, drama, and above all music, which he regarded as the highest of all the arts. He stressed over and over again the vital importance of the place of art in the education of the child, and in the growth of a civilization. One of his favourite themes was the essential oneness of Art, Science, Religion and Philosophy.  He was President of the International Fellowship of Arts and Crafts from 1923 to 1927.

Mr Jinarâjadâsa was one of the foremost Theosophical authors and his works — over forty in number — dealt with a wide range of problems concerning religion, science, art, social order and education.  He made a special study of the letters sent by the Mahatmas in the early days of the Society chiefly to Mr A. P. Sinnett, but also to other Theosophists, and published two volumes of Letters from the Masters of the Wisdom.  His series of small devotional works, especially In His Name, Flowers and Gardens and The Mediator, are a source of inspiration to thousands of readers.

Jinarâjadâsa was Head of the Manor Centre in Sydney, from 1934 and Director of the Adyar Library for several years.  In 1913 he was awarded the T. Subba Row medal by the Society for his Theosophical writings.  His Golden Book of the Theosophical Society, issued in 1925 and giving the history of the Society up to that date, is a treasure mine for those delving into the early days of the Society.

One of Jinarâjadâsa’s special interests was ‘The Ritual of the Mystic Star’ which he devised in 1917 and is still performed in many Lodges and in several Sections.  It presents the essential teachings of all the major religions and the importance of work done with selfless dedication.  This ‘Form of Service for Worship and Consecration’, meant for the public, has a special uplifting quality, radiating peace and blessing to the world.

Mr Jinarâjadâsa died in June 1953, a few months after relinquishing the Presidency of the Society.  A few years before his death, he wrote and handed to a fellow worker the following Epitaph:

'He loved children, the sea,
Beethoven, Wagner’s Ring, the
Hallelujah Chorus, and his
Gospel was Ruskin'

This epitaph sums up the nature of the ardent worker who became President because of his great aspiration to serve. Always humble, he impressed others by the many-sided activities, his dedication and undeviating service for the Society and the world. The benignity of his presence and the extraordinary range of his mind, made his life truly remarkable. 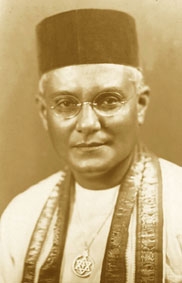