Helena Petrovna Blavatsky (1831–91) was perhaps the greatest Occultist of the West in recent times and an outstanding messenger, who presented the Ancient Wisdom for the modern age. With little fanfare she brought to bear powerful influences on human affairs, as is exemplified in her life and works. She did not bring anything new to mankind; in fact she succeeded in the great task of communicating wisdom that is as ancient as mankind.

Her achievements were twofold: founding jointly with a distinguished American, H. S. Olcott, the Theosophical Society in 1875; and writing on a prodigious scale spiritual and occult literature which entitled her to be known as ‘the Light Bringer’.

Helena Petrovna von Hahn was born at Ekaterinoslav in Southern Russia on 12 August 1831. Scion of a Russian aristocratic family, from her very childhood she displayed remarkable psychic activity, artistic and literary talents and intellectual accomplishments. Her psychic powers puzzled her family and friends. She was a linguist, a talented pianist and a fine artist, but also a fearless rider of half-broken horses, and always in close touch with Nature.

When almost eighteen, she married in a mood of rebellious independence. The marriage, as such, meant nothing to her, was never consummated and in a few months she escaped and travelled widely in Turkey, Egypt, and Greece, on money supplied by her father. In 1851, being then in London, she met the individual whom she had known in her psycho-spiritual visions from childhood — an Eastern Initiate of Rajput birth. He told her something of the work that was in store for her and from that moment she accepted  his guidance fully.

In 1851, HPB (as she is known) embarked for Canada, and after adventurous travels in various parts of the USA, Mexico, South America and the West Indies, went via the Cape and Ceylon (now Sri Lanka) to India in 1852. Her first attempt to enter Tibet failed. She returned to England via Java in 1853 and then to America in 1854.

In 1855 and in 1868, she succeeded in entering Tibet and underwent occult training with her Teachers. In 1858 she was in France and Germany and then returned to Russia. From 1860 to 1865, she lived in and travelled through the Caucasus, experiencing a severe physical and psychic crisis that placed her in complete control over her occult powers. She left Russia in 1865 and travelled extensively in the Balkans, Greece, Egypt, Syria, Italy and various other places. In 1870 she was back in Cyprus and Greece.

Later, in Egypt, she tried to form a Société Spirite, which soon failed. In the Spring of 1873, Helena was instructed by her Teacher to go to Paris and  to New York City, where she landed on 7 July 1873.

By 1873, HPB was in controlled possession of her many and most unusual spiritual and occult powers. She was considered to be the best available instrument for the work her Teachers had in mind, namely to offer to the world a new presentation, though only in brief outline, of the age-old Theosophia,

‘The accumulated Wisdom of the ages, tested and verified by generations of Seers . . . that body of Truth of which religions, great and small, are but as branches of the parent tree.’

A challenge was offered to her work by the Spiritualist movement then sweeping America. Helena stated:

‘I was sent to prove the phenomena and their reality, and to show the fallacy of the spiritualistic theory of spirits.’

No rational explanation of the mediumistic and related phenomena called ‘Spiritualism’ had been given. Scientific materialism threatened to destroy the faith in and search for spiritual realities. HPB went to Chittenden, Vermont, USA, where Col. H. S. Olcott was investigating mediumistic phenomena at the Eddy farm and publishing the results in important newspapers. She demonstrated that she could produce the phenomena herself and suggested their real explanation. She wrote some strong and brilliant articles for newspapers and journals defending this ‘true spiritualism’ and exposing fraudulent mediums.

The Theosophical Society is Formed

On 7 September 1875, HPB, Col. Olcott and W. Q. Judge, together with several others, formed a Society which they chose to call The Theosophical Society, for promulgating the ancient teachings of Theosophy, or the Wisdom concerning the Divine which had been the spiritual basis of other great movements of the past, such as Neoplatonism, Gnosticism, and the Mystery Schools of the classical world. The Inaugural Address by the President-Founder, Col. Olcott, was delivered on 17 November 1875, the official date of the founding of the Society. Starting from a generalized statement of objectives, the Founders soon expressed them more specifically in what we know as the Three Objects of the Theosophical Society.

In September 1877, a powerful impact was made upon the reading and thinking public by the publication of HPB’s first monumental work, Isis Unveiled. It was reviewed as one of the ‘remarkable productions of the century’.  Isis Unveiled outlines the history, scope and development of the Occult Sciences, the nature and origin of magic, the roots of Christianity, the errors of Christian theology and the fallacies of established orthodox science, against the backdrop of the secret teachings which run as a golden thread through bygone centuries, coming to the surface every now and then in the various mystical movements.

In 1879 HPB and Col. Olcott arrived in Bombay (now Mumbai), India. Soon after landing, they were contacted by Mr Alfred Percy Sinnett, Editor of the Anglo-Indian newspaper, The Pioneer of Allahabad. This contact soon proved to be of the utmost importance. HPB resumed her literary work at Mumbai. Articles were written and published in some European journals, as well as a few in India. However, the founding of a monthly journal, The Theosophist (published to this day), devoted to oriental philosophy, art, and occultism, embracing mesmerism, spiritualism and other secret sciences, gave HPB the opportunity to broadcast her message without hindrance. The articles she wrote for this journal from 1879 to 1887 were republished in the Collected Writings series.

In May 1882, a spacious estate was bought at Adyar, near Madras (now Chennai), and the Theosophical Society’s Headquarters was moved there at the end of the year. This centre soon became the radiating point for worldwide activity. In 1884 Col. Olcott left for London to petition the British Government on behalf of the Buddhists of Ceylon.  HPB, then in rather poor health, went to Europe with him. By the autumn of 1884 HPB was busily engaged in writing her second work, The Secret Doctrine, which was completed and published in two large volumes in October–December, 1888. The third volume was brought out posthumously. Her indefatigable helpers in the transcription and editing of the MSS were Mr Bertram Keightley and Mr Archibald Keightley.

The Secret Doctrine, based on Stanzas translated from the Secret Book of Dzyan with commentary and explanations by HPB, contains the most comprehensive account of esoteric wisdom or Theosophy available to the public. The preparation of the work was a most difficult task, since the author not only had the responsibility of explaining theosophical concepts and principles as clearly as possible, but also had the further assignment of demonstrating the presence of this wisdom in religion, science, and other fields of knowledge.

In 1889 HPB published The Key to Theosophy,

‘a clear Exposition, in the form of Question and Answer, of the Ethics, Science and Philosophy for the study of which the Theosophical Society has been founded’

and the devotional, mystical gem called The Voice of the Silence, containing selected excerpts translated from an Eastern scripture, The Book of the Golden Precepts, which, deeply occult and mystical in nature, she had learnt by heart during her training in the East. This little book, first published in 1889, carries the same metaphysical message as does The Secret Doctrine.

In July 1890, HPB established the European Headquarters of the Theosophical Society at 19, Avenue Road, St John’s Wood, London. Here she died on 8 May 1891.

Against the background of her writings and teachings, her life and character, her mission and occult powers, HPB has proved to be the greatest modern Occultist in the history of Western civilization. 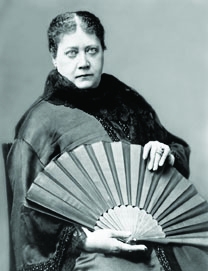