John Balfour Symington Coats (1906–79) was the sixth President of The Theosophical Society, between 1973 and 1979.  Long before he was called to this office, he had already impressed the Theosophical world by the bonds of friendship which he had forged with people, young and old, all over the world. Wherever he went, which was to practically every country in various official capacities, he made friends.

John Coats was born on 8 July 1906 in Scotland and was educated at Eton College in England from 1918 to 1924; later he went to France to learn French, which helped him afterwards in his work for the TS in Europe.  He was engaged in the family business for about five years, three of which he spent in Vienna, where he learned German.  It was in Vienna, in 1932, that he met a stranger in a café who introduced him to Theosophy, which, ‘virtually changed my life’.  The philosophy struck a deep chord of recognition in him, and he joined The Theosophical Society in the same year.  Prior to this, he had become a vegetarian, and given up smoking and alcohol as a result of his association with the Oxford Group Movement (later called Moral Rearmament).  He married Miss Elizabeth Ann (Betsan) Horlick in 1933, and together they travelled widely spreading the message of Theosophy.  They had five children, one of whom died in early childhood.

In 1935, Mr Coats and his family went to Adyar to work for the then President, George Sydney Arundale.  They were closely associated with Dr Arundale and Rukmini Devi for four years, and accompanied them on their travels to many countries.  Mr Coats was also involved in the World Federation of Young Theosophists in which Dr Arundale was much interested.

During the Second World War, Mr Coats spent a short time in the British Army, but as he injured a knee in a motorcycle accident he was invalided out.  This freed him to carry on with Theosophical work, and from 1941 to 1946 he was the General Secretary of the English Section of the Society.  The war years were difficult ‘but also greatly full of opportunities in very unusual circumstances’, as Mr Coats mentions.  As Mr Jinarâjadâsa was in London during these years, he also came into contact with him.  In 1946, John and Betsan Coats lectured extensively for the Society for three years, in the US, Canada, Mexico and Cuba. Mr Coats was elected Secretary of the European Federation of Theosophical Societies in 1953, which included more than twenty countries.  He had to travel widely, arranging Summer Schools, visiting Lodges including a number of them that were otherwise hardly ever visited.

In 1952, Mr and Mrs Coats helped actively to rehabilitate thousands of displaced persons living in European camps by means of an organization called Wings of Friendship, started by Mrs Coats.  They would combine their visits to TS Groups with visits to these camps in Germany, Austria, Italy and Greece.  It was a very busy period.

John Coats became Chairman of the European Federation in 1959, a position he held until 1968.  During this period he visited India several times, and also South America, the United States and Australia, and other places, such as Israel and Africa.  Twice he organized a charter flight to India for the Adyar Convention.  In 1966, Mr Sri Ram asked him to organize the World Congress in Salzburg, Austria, in which more than a thousand members from all over the world participated.  The last World Congress had been held 20 years previously in Geneva, Switzerland.

When Mr Sri Ram was President, he had asked Mr Coats to do everything he could for the Theosophical Order of Service (TOS) and Mr Coats complied. Youth, the world over, liked to gather around Mr Coats, and he realized the importance of bringing them into The Theosophical Society with an eye to its future welfare.  In 1962, Coats became the Chairman of the World Federation of Young Theosophists after the retirement of Rukmini Devi Arundale; but in 1974 he handed over the Chairmanship to a young member.

In 1973, following the death of Mr N. Sri Ram, Mr Coats was elected President of the Society.  He continued to travel widely, serving as an ambassador of Theosophy to many outside the ranks of the Society.  He believed firmly that the Society must reach out to the public and cooperate with allied organizations in order to further the cause of brotherhood and human development.  Whenever possible he accepted opportunities to meet people and to participate in programmes organized by a wide variety of bodies.  He also encouraged the publication of literature which would present Theosophical principles in an appealing manner to people of differing temperaments and backgrounds. Further, he established the International Theosophical Youth Centre at Adyar to stimulate and coordinate the work of the young and the young-at-heart.

'I think we have to be active in the service of brotherhood in some form or other as well as being concerned at all times to make Theosophical ideas available to the world.  It is to the world we must direct our effort, not only to our own groups.'

As Editor of The Theosophist, he believed in not directing it to any one group in particular; he wished to provide articles of some depth for the more serious student but also ‘lighter’ articles of wider appeal.  He felt that, without compromising its own unique teachings, the Society should be as open as possible to new ideas in religion and philosophy and new discoveries by science.  He saw The Theosophist as a potentially powerful means of drawing the attention of the public to the Society, and to the extensive body of truth known as Theosophy.

From the month of November during the sixth year of his Presidentship, Mr Coats suffered cardiac attacks and died on 26 December 1979 on the opening day of the annual Convention at Adyar. 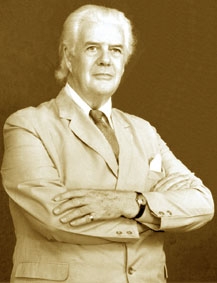