Nilakanta Sri Ram (1889–1973), fifth President of The Theosophical Society from 1953 to 1973, dedicated himself to Theosophical work as a young assistant of Dr Besant.  He was closely associated with her social, political and educational and other activities, and helped her in editing New India, a daily newspaper that was influential in the struggle for India’s freedom.

As President, he travelled and lectured all over the world, and wrote extensively on many subjects, reminding members of The Theosophical Society and many others that the test of being a religious person lies in the widening of goodwill and love for others — irrespective of religious affiliations — and a diminution of the individual self and its narrow preoccupations.

Sri Ram was born into a Theosophical family on 15 December 1889 in Akhilandapuram, Tanjavur, India.  He went to Hindu High School, Madras (now Chennai), and obtained his Bachelor degree in Mathematics from the University of Madras.  He did not complete his Master’s degree, however, for by that time, Theosophy had entered his life and he was completely engrossed in working for Dr Besant.  Later he was closely associated with Dr Arundale and Mr Jinarâjadâsa in their work for The Theosophical Society.  Sri Ram began his career in the TS as a teacher in Theosophical schools founded by Dr Besant, and later assisting her in her journalistic activities.  This was followed by work for Home Rule and the Home Rule League.  He was one of those who helped in drafting the Commonwealth of India Bill presented in the British Parliament in the 1920s.  He was chosen to serve Dr Besant as her Private Secretary in the years 1929–33; and with Mr Jinarâjadâsa took care of her during the period prior to her passing.  He was among the few who were by her bedside when she died.  Mrs Besant loved him as a son, and in a book she presented to him, she inscribed the words ‘Shri Rama with love and blessing. Endure to the End.’ She spoke of him as ‘a mine of information along many difficult lines and accurate in all’.

Mr Sri Ram was content to work quietly in the background.  Although he had held every office at Adyar under three Presidents, having been Treasurer (1937–39), Recording Secretary (1939–41) and Vice-President of the Society (1942–46), he was little known outside India until a year or so before his own election as President in February 1953.  When C. Jinarâjadâsa’s period of office as President was coming to a close, he nominated Sri Ram as the candidate for the onerous office, describing him as the wisest person he knew.  For the first time in the history of the Society an outgoing President installed the newly elected one, handing over responsibility to him in person.  By the time he became President, five books of Sri Ram had already been published covering the whole field of Theosophy expressed in modern idiom: Thoughts for Aspirants, The Human Interest, A Theosophist Looks at the World, An Approach to Reality and Man: His Origins and Evolution. The underlying theme in these books is that ‘the central truth of Theosophy is that there is a Unity behind all diversity’.

President of The Theosophical Society

Mr Sri Ram endeared himself to members all over the world, never imposing his personality or views on others.  At Adyar he worked long hours, but was always available to guide members and visitors on matters of business, personal problems or the broad field of Theosophy. He had a quick grasp of the essentials of whatever subject was under discussion and expressed his views with shrewdness and wisdom. He could be firm but was always kind and tolerant.  His spontaneous answers to questions at Conventions and summer schools were masterpieces of clarity, tact and breadth of understanding.

During his Presidency, Mr Sri Ram encouraged a forward-looking, open-minded attitude to Theosophy and the work of the TS.  He stressed principles rather than details and was the bridge between the old order and the new.   Quietly he wrought an unobtrusive revolution in the Theosophical Society — broadening and deepening its vision, freeing it from the dangers of crystallization, preparing the ground for the sowing of the seeds of the new cycle.   The concept of Theosophy and a deeper understanding of The Secret Doctrine, was balanced by modern scholarship particularly in the fields of science and sociology.

Sri Ram never sought publicity or projected his personality.  This quality was reflected in his attitude to the Adyar estate, which he felt quite strongly should be essentially an âsrama, a centre of peace in the midst of the noisy world, a tranquil focus through which the forces of harmony could radiate undisturbed. Today, because of the use of cars and scooters in the Estate and because it is surrounded by housing estates, busy roads and loudspeakers, it is harder to maintain the atmosphere of an âºrama, which he enjoined us to do, by living a life of altruism, devoted to the ideals and work of the Society.

From 1946, Sri Ram travelled and lectured for the Society in India, Europe, England, USA, Australia, New Zealand and also many countries in Europe as well as in South and Central America and Africa.  He travelled also to all parts of India, including the present Pakistan, and in Bangladesh, Burma and Sri Lanka. Whatever he said, he conveyed with great understanding and affection, both in lectures and in the many private interviews and conversations he had with people.  His visits had a lasting and profound influence, for, however rational and intellectually convincing his teaching, he also deeply touched the hearts of listeners with his own affectionate heart and clear conviction of values realized through personal experience.  He brought to his writings a background of Eastern Wisdom combined with a keen awareness of modern thought and knowledge, as well as a sensitive understanding of human problems.  His special felicity of style enabled him to convey profound ideas in a lucid and absorbing manner.  He was a keen and sensitive observer of human behaviour and events in the world.  Through his writings and lectures he touched practically all aspects of life and activity — including ethics, behaviour, education, peace, economics, justice, science, arts and problems of government.

When Dr Besant died in 1933 The Theosophical Society had just passed through a critical period, perhaps the most important of all.  It was said that J. Krishnamurti had left Adyar, and many hundreds of members, including some very active workers and prominent personalities, quit the TS.  For some years afterwards, a crisis simmered under the surface, caused by the tension between two different forces — one pulling towards more occultism; and the other, following Krishnamurti’s call for endeavour towards a fundamental internal change that would be reflected in all relationships in every situation of daily life.

The outstanding contribution of Sri Ram to the progress of The Theosophical Society was to lead it skilfully out of this crisis, which did not take concrete shape in a visible conflict, but was in the nature of a mental dichotomy.  With wisdom and gentleness Sri Ram directed the thinking and interest of the members towards deeper questions, away from occult information and peripheral matters to the fundamental work implied in the objects of the Theosophical Society.  It was during his presidentship that little by little members all over the world began realizing that the revolt of Krishnamurti was not a disaster for the Society, but a beneficial event.

It is to Sri Ram’s credit that in the twenty years of his Presidency, he changed the entire emphasis of Theosophical perspectives.  Harking back to the spirit of the Founders, he asserted the importance of total freedom of inquiry in the spiritual life and raised the level of that inquiry from a petty personal horizon to a wide range of problems related to human destiny.  During his period of office an important and necessary work was the impetus to the publication of Theosophical books in regional languages.  A new and handsome building was erected at the International Headquarters for the Adyar Library and Research Centre, as the Library had expanded.  The work of the Theosophical Publishing House also increased at a rapid rate, necessitating the construction of a new building for the Vasanta Press and equipping it with suitable machinery.

An event of importance which took place in 1966 was the World Congress in Salzburg, where Sections and Lodges from all over the world were represented. Mr Sri Ram presided over this Congress and numerous other Congresses and Conventions in the course of his travels, always leading the members into the depths of Theosophy.

He passed to peace on 8 April 1973.  His most valued legacy, perhaps, was summed up in his own words:

'Of all the arts that exist, living demands the highest quality of intelligence and is the most exacting. The experience of living is ultimately the experience of a nature in ourselves, which shows itself as beauty, as love, as truth.' 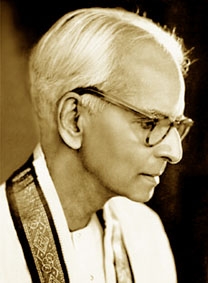