International Vice-President of the Theosophical Society

In accordance with Rule 11(a) of the TS international Rules, I had nominated Dr Deepa Padhi as Vice-President on 18 March 2017.  At the close of the voting period we have received 28 votes in favor and 0 votes opposing from the General Council members.

It is both a pleasure and an honor to announce that as of 18 April 2017 Dr Deepa Padhi is the new international Vice-President of the Theosophical Society Adyar.

Dr Deepa Padhi (1951) is a retired Professor of Philosophy. She currently lives in Bhubaneswar, Odisha. While in service, she was a recipient of the University Grants Commission of India (UGC) faculty development Programme Fellowship for Ph.D. In 2003, she was again selected by the UGC as a Post Doctoral Research Scholar and did research on “Live and Let Live - An Analytical Study in Holistic Ethics”. She received her D.Lit degree in 2007 from the Utkal University, Odisha. She has to her credit a book titled, “The Ethical Philosophy of the Bhagavad Geeta”. Recently she has edited a book on women’s issues titled, ‘Yes, She Can’. She writes articles on Social, Philosophical, Theosophical and Spiritual issues for magazines and journals.

Dr Padhi is a second generation Theosophist. Her father, the late Dr R.C. Rath, was a dedicated theosophist who founded the Utkal Theosophical Federation in Bhubaneswar, Odisha and worked as the President for many years.

Dr Padhi joined the Theosophical Society in 1994 and became a member of the Debapi Lodge, Bhubaneswar. She is presently the Secretary of the Lodge. She joined the Theosophical Order of Service in 2006 and became the Secretary of the Mahabharat Group, Odisha Region and President in 2010. In 2012, the Mahabharat Group started the project ‘Change the mindset to stop violence against women”, which was launched by the former Governor of Odisha. In 2013, Dr Deepa Padhi was invited to speak on Transformational Practices at the Summer National Convention of the Theosophical Society in America, and also made a presentation on violence against women in India. While there she attended the international conference of the Theosophical Order of Service. She believes in practical Theosophy, which to her is spiritual self-transformation and service.

Dr Padhi took over as the President, TOS, Odisha in 2016. She is actively engaged with projects for women’s empowerment and education. She is associated with many orphanages, old age homes, and institutions to take care of women in distress and to rehabilitate them. She is the Vice President of the Governing Body of TOS Rayagada School. In 2016 she organized a conference on Theosophical Education that involved teachers and administrators from Theosophical schools across India. The meeting took place in Bhubaneswar and was facilitated by Vicente Hao Chin, director of the Golden Link Theosophical College in the Philippines.

Dr Padhi is a founding member of Dristidaan - an eye-banking organization for cornea transplants and research. She continues as a Member of its Executive Committee. She is also a founding member and past president of the Inner Wheel Club, Bhubaneswar. It is an International Organization consisting of the female relatives of Rotarians.

She is associated with the Indian Red Cross Society (Odisha Branch) as Life Member and also with Odisha Council for Child Welfare. She is a member of the Advisory Committee of Mission Ashra - a home for mentally ill and destitute women. 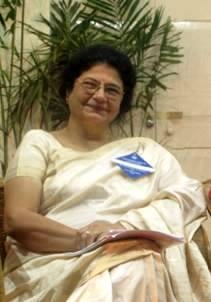