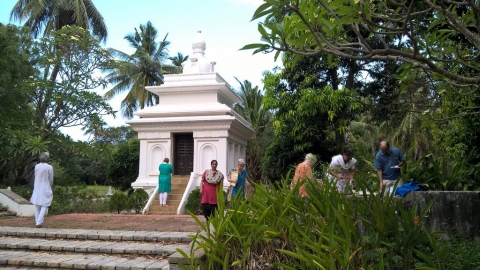 Situated in the coconut grove by the Adyar River, not far from the Headquarters building, is the Buddhist shrine.  It was built in 1925 under the direction of Mr C. Jinarajadasa, and enshrines a gray sandstone image of the Lord Buddha from Eastern India.  This statue, given by Annie Besant, shows the Buddha as the Teacher of Dharma, turning the Wheel of the Law.  Around his head is an inscription in Tibetan characters: 'He taught the cause of all things as also the means of cessation'. 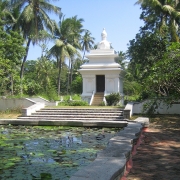 Directly facing the temple is a lily tank and beyond it a magnificent Bodhi tree (ficus religiosa), grown from a sapling descended from the original tree under which the Lord Gautama attained Enlightenment.  Nearby stood an ancient Buddhist gong, which used to be struck in the old days at six o'clock morning and evening. 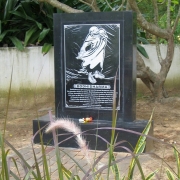 In 2009 a Zen Memorial Stone was unveiled.  The Stone was generously donated by the Institute of South Indian Buddhist Studies and is of special significance because Bodhidharma, the great Buddhist monk who brought Zen to China in the 6th century, was born in Kanchi, South India.
The Buddhist Shrine area is a place of great peace, where visitors can sit quietly on the stone benches of the precincts in silent contemplation.